So i was going to a coffee place because i finally had the time and the inspiration to write my next blog. But i ended up in a wine bar having the most fantastic glass of white wine to go with my (apparently English) writing. To keep me focussed and relaxed i have Beethoven on my iPad. It also helps me to not hear the two exceptionally arrogant ladies that almost took my table and now have to sit somewhere else, being annoyed. These were the type of women that talks about you in the third person while you are right there in front of them saying things like; “she wants us to move, let’s go sit over there”.

Driving the route 66 has always been a dream, like a nostalgic road trip with extremely loud music out of the speakers, while smoking a cigarette with my arm out of the window. Well, it has been exactly like that! Although the Route 66 has been replaced by the Interstate 40 for the larger part, we still had the possibility to drive it trough some really nice and nostalgic places. The neon lights and big commercial signs are still there but they don’t work anymore and the old-timers are now parked in front of renewed motels, just to attract tourists. But still, it’s the Route 66. Pretty awesome to be here. Another thing that stood out was New Orleans, what an experience to finally see this southern Mississippi city with all those crazy people on the streets, the lovely soul food and of course the fantastic night live and music scene. Just like in Nashville where we met this musician who knew and had played with a very famous Dutch singer (Andre Hazes). We had the best nights going out in these musical cities. Definitely worth going back to.

Due to extremely hot temperatures, we’ve been driving our cool (figurally speaking) 1992 Dodge ram van really early in the morning (4 am) from one place to another. Like the road from Las Vegas to Reno, which is pretty, scenic and sometimes completely deserted. Just driving through the desert for nine hours and crossing the old mine villages which have decreased in number of inhabitants drastically, was like a movie scene. The landscape changed so much since we’ve started our road trip from the east coast to the west; from very humid and tropical climate in Florida to nice cold winds and mountain rivers in California. All very different and beautiful in their own way, but i think (for now) my preference will go to the west of the USA. Incredible nature and liberal people. Furthermore, people are really friendly and helpful. We had a flat tire in Texas and of course our tools were so minimum that we would have never been able to take off the tire. This Texan guy hears the sound of our flat tire and just comes out of his comfy home and helps us out and within 45 minutes we are back on the road again! It seemed like no trouble to him.

Very different from the nasty Miccosukee police officer that had a very bad day, when pulling us over, while we did (almost) nothing wrong and had our car towed away in crazy Miami. It all started with our desire to start camping in Miami, which was just the worst plan ever. We did not find any (normal) campground so we decided to camp out on a parking lot (with a 120 degrees and no a/c). The plan just got worse slowly, like a very bad movie that you cannot turn off because you’re in it too long. The van needed some constructions before we could camp in it; there was this cabin that we had to saw in half, so Hielke started to work in that, while i cooked dinner and cleaned up the van. It turned dark, so we needed to hurry because of all the bugs, but we had no luck, again picture the bad movie. I accidently messed-up the very simple rice diner with a rotten lime (which i couldn’t see of course) Also the small construction on the cabin was giving us no luck, so, frustrated and fed up with the whole thing, and after being attacked by insanely big flying black bugs who smashed into our van, like kamikaze pilots, we decided this was the end of this horror movie (so we thought) and we drove off.

Just a minute after we left the parking lot, this police car turns up behind us and turns on these massive lights. It took a while before something happened (apparently the police officer thought that the van looked threatening), so Hielke got out of the van and immediately was summoned ‘BACK into the vehicle’. At first we thought it was funny (you know like in the movie) and we thought we had absolutely nothing to worry about, because we were being pulled over that same day by different police officers and they gave us the ‘friendly advice’ to get a temporary licence plate because the one we had was no good. We actually had a cardboard licence plate (with a date on it) from the previous owner, because he had a title loan on the van and therefore it took a while for us to get the original title on our name. So we were thankful that these nice police officers advised us and were happy to get a new licence plate once we would arrive in Miami. No problems, just good movie stuff.

We tried to explain this to the police man, but he just had a bad day and wasn’t going to give us any advises! He just kept checking our VIN number even after we explained the title was not yet in our name! When he just couldn’t find us as the owner in one of his systems it went wrong. “This van will not drive one more mile tonight”, he said while flashing us in the face with a flashlight. “You better start packing your belongings because the towing car is on its way”. This movie just reached It’s lowest point! We just couldn’t believe that this was happening and certainly did not realize the consequences. So there we were in the middle of nowhere, waiting for a taxi to take us to a hotel somewhere. Where to go? Miami was a $50, – drive away we learned.

The following days we spent most of our time in this crappy hotel calling all sorts of companies. The guy who checked us into the hotel was a kid, giving us a hard time and the service just got worse with the day manager! Seriously the guy belonged in a muffler shop (and still would have been considered rude) with all his swearing and nagging. But we had no van, not enough clean clothes so we had bigger problems on our mind. We needed the original title on our name and quick! Apparently you can get a really cheap title in Georgia, but you have to have a Georgia drivers licence. So that was quickly out of our reach. Fortunately you can buy anything in Florida, if you’re willing to pay! We found out we could get a Florida licence plate and put the title on our name for the little amount of $400, – (BAM!!) at this local tag agency. But these agencies do a live check on the VIN number, so we needed to get the van first. But in order to get the van back from the towing agency, we needed the title to be in our name first. Wow, this was getting really frustraded! But we were in luck, the previous owner had sent a ‘Power of Attorney’ with the original title which was on his name, so when i mentioned that to the, not so very cooporative tralor trash lady at the towing agency, all doors were suddenly open. So, on the third day we finally could pick up the van after paying $ 350, – and then got the title. This was some trip to Miami.

Through the State Police we found out that the police officer was actually way out of line to take such strong measures. But hey, without a lawyer you get nowhere in the US. So we just learned from this experience and tried to forget the whole thing.

As i almost finished my wine in this nice café i realize that this experience has been a good story to tell. And to be honest, if you’re going to buy a van in the US, you are likely to get in some kind of trouble. You also make this awesome trip where you see so much of a country and meet so many people. It is just a great ride. 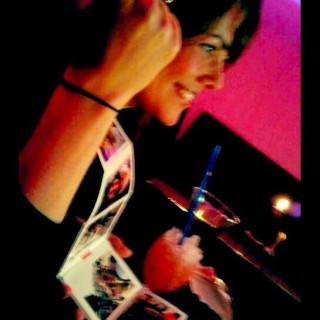